Its chances in this area were the subject of the discussion held in the Zamosc City Hall on 22 June 2017.

As geothermal includes ground heat pumps as well, it was impossible for the discussion to omit the analysis of the low-temperature geothermal potential of the Zamosc region. Presentations on this subject were given by the PIG-PIB employee Jacek Kocyła, PhD, who is the leader of the WP3 task of the project “Geothermal4PL – Support for the sustainable development and use of shallow geothermal energy in the areas covered by the Mieszkanie Plus programme in Poland”. Mr Kocyła conducted a preliminary analysis, using the data collected in geological databases. As it turned out, the geological and hydrogeological conditions of the City of Zamosc, which occur at the depth of approx. 75 m, represent a good potential for ground heat pumps. 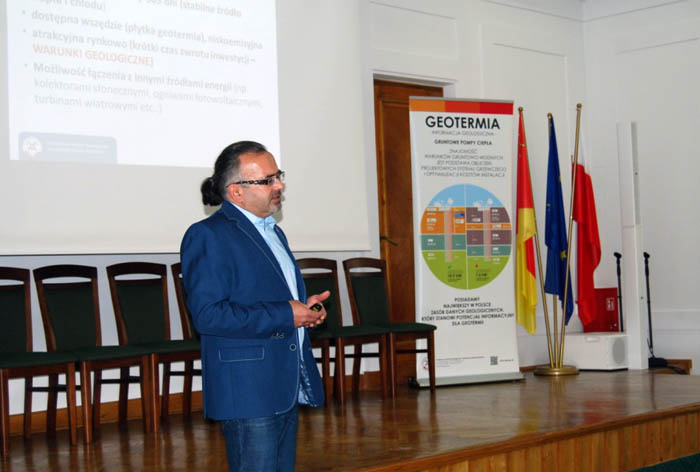 Jacek Kocyła, PhD, the leader of the WP3 task of the Geothermal4PL project presents the analysis of the low-temperature geothermal potential of the Zamosc region for the possibility of installation of ground heat pumps

At the request of the mayor of Zamosc, the PIG-PIB experts produced an expert report entitled “The possibility study of the occurrence and utilisation of therapeutic and thermal waters in Zamosc”.

The meeting where its results were presented was attended by the city mayor Andrzej Wnuk, the representatives of the city hall and the councillors, who will make decisions on the possible geothermal investments in the city in the future. The local media interested in the development of the city did not miss the meeting, either. 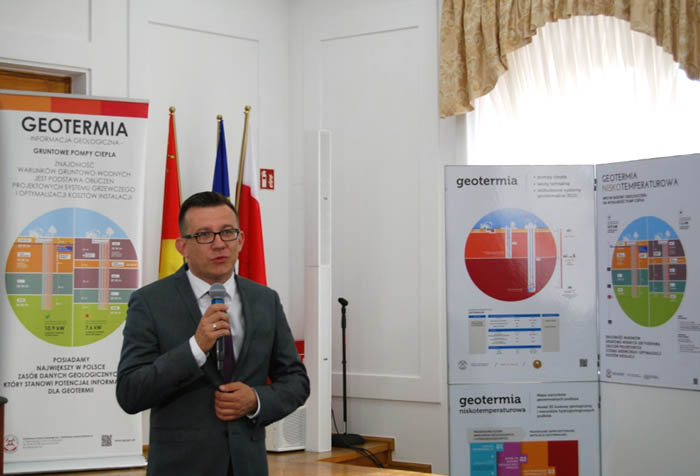 The meeting was opened by Andrzej Wnuk, the mayor of Zamosc

The meeting which was held in Zamość was organised within the framework of the EU Sustainable Energy Week.