The scopes of work for individual transboundary monitoring networks are diverse and results from the arrangements made at the level of international commissions for cooperation on transboundary waters or other formal arrangements. The most significant information on the monitoring conducted for individual sections of the national border is presented below (Figure 1). 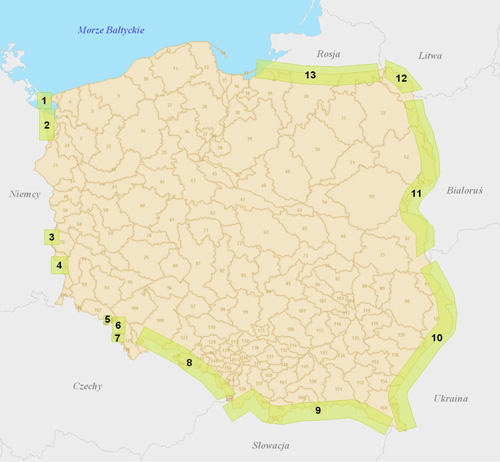 Figure 1 Location and size of the transboundary monitoring networks

Monitoring of the Uznam Island groundwater has been performed since 1970s for the purpose of assessing the impact of groundwater intakes on the level of exhausting the disposable resources of the Quaternary transboundary reservoir of fresh groundwater. In 2012, two common Polish-German cycles of sampling were performed by the Polish-German Working Group for groundwater management in the eastern part of Uznam Island.

Monitoring in the area of Gubin-Łęknica, performed for the purpose of assessing the impact of draining the German brown coal open-pit mines in the area of Poland.

In the monitored area observations are conducted at 46 points, 16 of which are included in the groundwater monitoring and research network and the remaining 30 points are what are known as external points. The results for the 2012 hydrological year were interpreted on the basis of the observations.

Monitoring along the border with the Czech Republic

The transboundary monitoring network in the area of the Intra-Sudetic Trough in the region of the Kudowa Foredeep consists of 52 points. In 2012 geologists performed four complete measurement series (April, July, September, and December), which included the following operations:

During the measurement series in April and September, common Polish-Czech control measurements were performed on the both sides of the national border.

In connection with the hazard posed for groundwater resulting from the water management of the excavations left after closing the sulphur mine in Jaworów, the studies in 2012 covered the Polish border part of the Szkło River catchment area. Statements concerning the measurement and research results were prepared not only for the points of the groundwater monitoring and research network, but also for the inventoried units in the border area of the Szkło catchment area. Their characteristics were developed in the scope of analyzing the fluctuations in the groundwater level and chemical composition of the water.

In 2012, in the transboundary area between Poland and Belarus, stationary hydrogeological observations were continued at 8 points of the groundwater monitoring and research network, located in the zone of recognized transboundary groundwater flows. (Figure)

Moreover, observations from two new piezometers in Białowieża (II/1486/1) and Dubiny (II/1487/1) began in November 2012. The first piezometer is used to monitor the quaternary aquifer. located closest to the surface, and the second piezometer to monitor the primary tertiary water supply aquifer.

Flows of waters were observed at 7 boundary groundwater units and detailed characteristics were prepared for 15 transboundary flow zones. The characteristics include the following scope of nature-related issues: geomorphological conditions, land development, protected areas, geological structure, hydrogeological conditions, characteristics of water flow zones, assessment of the first aquifer susceptibility to contaminants, and a risk assessment for the quality of groundwater. The study contains the data necessary for selecting locations for new piezometers along the border with Belarus.

Stationary measurements of groundwater level were conducted at eleven points of the transboundary groundwater monitoring network along the border with the Republic of Lithuania, and additionally at 4 piezometers of the first order hydrogeological station in Sidorówka.

Automatic measurements of the groundwater level and temperature were performed at ten measuring points of the transboundary monitoring network.

The chemical composition of the water samples was tested for ten transboundary monitoring points and two piezometers of the hydrogeological station in Sidorówka.

In accordance with the arrangements of the 1st conference of the 3rd Working Group performing its activities by the Polish-Lithuanian Commission for Transboundary Waters Management, which was held in October 2012, another physicochemical sampling cycle was performed for selected measuring points located on the both sides of the border between Poland and the Republic of Lithuania. International studies have been carried out every year since 2007 using the same group of six piezometers. Results of the chemical composition of the water samples collected during the Polish-Lithuanian sampling using the same group of piezometers from which analyses were performed independently in the Central Chemical Laboratory of the National Geological Institute and in the Laboratory of the Lithuanian Geological Service did not demonstrate any significant differences in the values of chemical parameters and content of individual indicators.

During the 1st conference of the 3rd Working Group performing its activities by the Polish-Lithuanian Commission for Transboundary Waters Management the representatives of the Lithuanian delegation proposed to exchange and update the information regarding lithostratigraphic sections and structures of the piezometers located in the border zone between Poland and Lithuania.

The proposed position also pertained to the plans to create a common base for transboundary groundwater monitoring points.

In 2012, stationary hydrogeological observations along the border with the Kaliningrad Oblast of the Russian Federation were conducted at 7 measuring stations of the groundwater monitoring and research network (SOBWP) of the second order. The border water monitoring points are located in the areas of groundwater bodies no. 19, 20 and 21. Moreover, within the framework of the chemical monitoring of groundwater, field measurements of physicochemical parameters were performed in 2012, samples were collected for physicochemical analysis from 10 piezometers and the hydrochemical types of waters and quality classes were determined.